A tunnel diode or Esaki diode is a type of semiconductor that is capable of very fast operation, well into the microwave frequency region, made possible by the use of the quantum mechanical effect called tunneling.
It was invented in August 1957 by Leo Esaki, Yuriko Kurose and Takashi Suzuki when they were working at Tokyo Tsushin Kogyo, now known as Sony. In 1973 Esaki received the Nobel Prize in Physics, jointly with Brian Josephson, for discovering the electron tunneling effect used in these diodes. Robert Noyceindependently came up with the idea of a tunnel diode while working for William Shockley, but was discouraged from pursuing it.
These diodes have a heavily doped p–n junction that is about 10 nm (100 Å) wide. The heavy doping results in a broken band gap, where conduction bandelectron states on the n-side are more or less aligned with valence band hole states on the p-side. 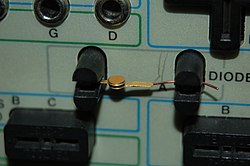 Tunnel diodes were first manufactured by Sony in 1957 followed by General Electric and other companies from about 1960, and are still made in low volume today. Tunnel diodes are usually made from germanium, but can also be made from gallium arsenide and silicon materials. They are used in frequency converters and detectors. They have negative differential resistance in part of their operating range, and therefore are also used as oscillators, amplifiers, and in switching circuits using hysteresis. 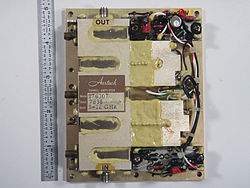 In 1977, the Intelsat V satellite receiver used a microstrip tunnel diode amplifier (TDA) front-end in the 14 to 15.5 GHz frequency band. Such amplifiers were considered state-of-the-art, with better performance at high frequencies than any transistor-based front end. In 2013 the NEE-01 Pegaso and NEE-02 Krysaorsatellites used power management modules based on a series of tunnel diodes to fast switch between solar powered operation and battery powered operation replacing otherwise very complex electronics with a few devices.
The highest frequency room-temperature solid-state oscillators are based on the resonant-tunneling diode (RTD).
Another type of tunnel diode is a metal–insulator–metal (MIM) diode, but its present application appears to be limited to research environments due to inherent sensitivities. There is also a metal–insulator–insulator–metal (MIIM) diode, where an additional insulator layer allows “step tunneling” for precise diode control.

Under normal forward bias operation, as voltage begins to increase, electrons at first tunnel through the very narrow p–n junction barrier and fill electron states in the conduction band on the n-side which become aligned with empty valence band hole states on the p-side of the p-n junction. As voltage increases further, these states become increasingly misaligned and the current drops. This is called negative resistance because current decreases with increasing voltage. As voltage increases yet further, the diode begins to operate as a normal diode, where electrons travel by conduction across the p–n junction, and no longer by tunneling through the p–n junction barrier. The most important operating region for a tunnel diode is the negative resistance region. Its graph is different from normal p-n junction diode. 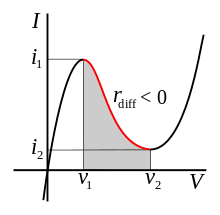 IV curve similar to a tunnel diode characteristic curve. It has negative differential resistance in the shaded voltage region, between v1 and v2.

In a conventional semiconductor diode, conduction takes place while the p–n junction is forward biased and blocks current flow when the junction is reverse biased. This occurs up to a point known as the “reverse breakdown voltage” at which point conduction begins (often accompanied by destruction of the device). In the tunnel diode, the dopant concentrations in the p and n layers are increased to a level such that the reverse breakdown voltage becomes zero and the diode conducts in the reverse direction. However, when forward-biased, an effect occurs called quantum mechanical tunneling which gives rise to a region in its voltage-current behavior where an increase in forward voltage is accompanied by a decrease in forward current. This negative resistance region can be exploited in a solid state version of the dynatron oscillator which normally uses a tetrode thermionic valve (vacuum tube).
The tunnel diode showed great promise as an oscillator and high-frequency threshold (trigger) device since it operated at frequencies far greater than the tetrode could, well into the microwave bands. Applications for tunnel diodes included local oscillators for UHF television tuners, trigger circuits in oscilloscopes, high-speed counter circuits, and very fast-rise time pulse generator circuits. The tunnel diode can also be used as a low-noise microwave amplifier. However, since its discovery, more conventional semiconductor devices have surpassed its performance using conventional oscillator techniques. For many purposes, a three-terminal device, such as a field-effect transistor, is more flexible than a device with only two terminals. Practical tunnel diodes operate at a few milliamperes and a few tenths of a volt, making them low-power devices. The Gunn diode has similar high frequency capability and can handle more power.
Tunnel diodes are also more resistant to ionizing radiation than other diodes. This makes them well suited to higher radiation environments such as those found in space.

Tunnel diodes are notable for their longevity, with devices made in the 1960s still functioning. Writing in Nature, Esaki and coauthors state that semiconductor devices in general are extremely stable, and suggest that their shelf life should be “infinite” if kept at room temperature. They go on to report that a small-scale test of 50-year-old devices revealed a “gratifying confirmation of the diode’s longevity”. As noticed on some samples of Esaki diodes, the gold plated iron pins can in fact corrode and short out to the case. This can usually be diagnosed, and the diode inside normally still works.
However, these components are susceptible to damage by overheating, and thus special care is needed when soldering them.