A diode bridge is an arrangement of four (or more) diodes in a bridge circuit configuration that provides the same polarity of output for either polarity of input.

When used in its most common application, for conversion of an alternating current (AC) input into a direct current (DC) output, it is known as a bridge rectifier. A bridge rectifier provides full-wave rectification from a two-wire AC input, resulting in lower cost and weight as compared to a rectifier with a 3-wire input from a transformer with a center-tapped secondary winding.
The essential feature of a diode bridge is that the polarity of the output is the same regardless of the polarity at the input. The diode bridge circuit was invented by Polish electrotechnician Karol Pollak  and patented on 14 Jan, 1896 under the number DRP 96564. It was later published in Elektronische Zeitung, vol. 25 in 1897 with annotation that German physicist Leo Graetz also was researching this matter at that time. Today the circuit is still often referred as Graetz circuit or Graetz bridge. 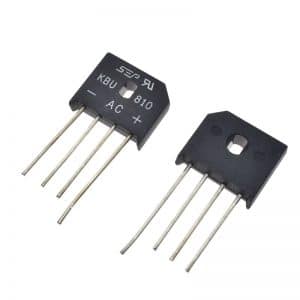 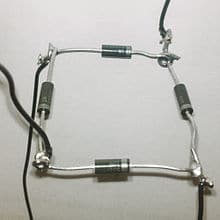 A hand made diode bridge. The wide silver band on the diodes indicates the cathode side of the diode.

According to the conventional model of current flow (originally established by Benjamin Franklin and still followed by most engineers today ), current is defined to be positive when it flows through electrical conductors from the positive to the negative pole. In actuality, free electrons in a conductor nearly always flow from the negative to the positive pole. In the vast majority of applications, however, the actual direction of current flow is irrelevant. Therefore, in the discussion below the conventional model is retained.
In the diagrams below, when the input connected to the left corner of the diamond is positive, and the input connected to the right corner is negative, current flows from the upper supply terminal to the right along the red (positive) path to the output, and returns to the lower supply terminal via the blue (negative) path.

In each case, the upper right output remains positive and lower right output negative. Since this is true whether the input is AC or DC, this circuit not only produces a DC output from an AC input, it can also provide what is sometimes called “reverse polarity protection”. That is, it permits normal functioning of DC-powered equipment when batteries have been installed backwards, or when the leads (wires) from a DC power source have been reversed, and protects the equipment from potential damage caused by reverse polarity. 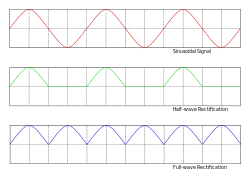 Prior to the availability of integrated circuits, a bridge rectifier was constructed from “discrete components”, i.e., separate diodes. Since about 1950, a single four-terminal component containing the four diodes connected in a bridge configuration became a standard commercial component and is now available with various voltage and current ratings.

For many applications, especially with single phase AC where the full-wave bridge serves to convert an AC input into a DC output, the addition of a capacitor may be desired because the bridge alone supplies an output of pulsed DC (see diagram to right).
The function of this capacitor, known as a reservoir capacitor (or smoothing capacitor) is to lessen the variation in (or ‘smooth’) the rectified AC output voltage waveform from the bridge. There is still some variation, known as ripple. One explanation of ‘smoothing’ is that the capacitor provides a low impedance path to the AC component of the output, reducing the AC voltage across, and AC current through, the resistive load. In less technical terms, any drop in the output voltage and current of the bridge tends to be cancelled by loss of charge in the capacitor. This charge flows out as additional current through the load. Thus the change of load current and voltage is reduced relative to what would occur without the capacitor. Increases of voltage correspondingly store excess charge in the capacitor, thus moderating the change in output voltage / current.
The simplified circuit shown has a well-deserved reputation for being dangerous, because, in some applications, the capacitor can retain a lethal charge after the AC power source is removed. If supplying a dangerous voltage, a practical circuit would include a reliable way to discharge the capacitor safely. If the normal load cannot be guaranteed to perform this function, perhaps because it can be disconnected, the circuit should include a bleeder resistor connected as close as practicable across the capacitor. This resistor should consume a current large enough to discharge the capacitor in a reasonable time, but small enough to minimize unnecessary power waste.
The capacitor and the load resistance have a typical time constant τ = RC where C and R are the capacitance and load resistance respectively. As long as the load resistor is large enough so that this time constant is much longer than the time of one ripple cycle, the above configuration will produce a smoothed DC voltage across the load.
When the capacitor is connected directly to the bridge, as shown, current flows in only a small portion of each cycle, which may be undesirable. The transformer and bridge diodes must be sized to withstand the current surge that occurs when the power is turned on at the peak of the AC voltage and the capacitor is fully discharged. Sometimes a small series resistor is included before the capacitor to limit this current, though in most applications the power supply transformer’s resistance is already sufficient. Adding a resistor, or better yet, an inductor, between the bridge and capacitor can ensure that current is drawn over a large portion of each cycle and a large current surge does not occur.
The capacitor can be followed by additional filter elements (capacitors plus resistors and inductors) to reduce the ripple further. When an inductor is used this way it is often called a choke. The choke tends to keep the current (rather than the voltage) more constant. Although the inductor gives the best performance, usually the resistor is chosen for cost reasons.
Because of the increasing availability of voltage-regulator chips, passive filters are less commonly used. The chips can compensate for changes in input voltage and load current, which the passive filter does not, and eliminate ripple to a high degree.
The idealized waveforms shown above are seen for both voltage and current when the load on the bridge is resistive. When the load includes a smoothing capacitor, both the voltage and the current waveforms will be greatly changed. While the voltage is smoothed, as described above, current will flow through the bridge only during the time when the input voltage is greater than the capacitor voltage. For example, if the load draws an average current of n Amps, and the diodes conduct for 10% of the time, the average diode current during conduction must be 10n Amps. This non-sinusoidal current leads to harmonic distortion and a poor power factor in the AC supply.
Some early console radios created the loudspeaker’s constant field with the current from the high voltage (“B +”) power supply, which was then routed to the consuming circuits (permanent magnets were then too weak for good performance) to create the speaker’s constant magnetic field. The speaker field coil thus performed 2 jobs in one: it acted as a choke, filtering the power supply, and it produced the magnetic field to operate the speaker.

The diode bridge can be generalized to rectify polyphase AC inputs. For example, for a three-phase AC input, a half-wave rectifier consists of three diodes, but a full-wave bridge rectifier consists of six diodes.
Half-wave rectifier may be considered as wye connection (star connection), because it returns the current through the centre (neutral) wire. Full-wave is more like delta connection, although it can be connected to the three phase source of either wye or delta and it does not use the centre (neutral) wire. 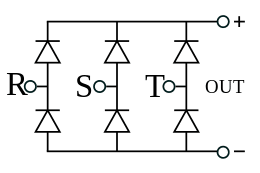 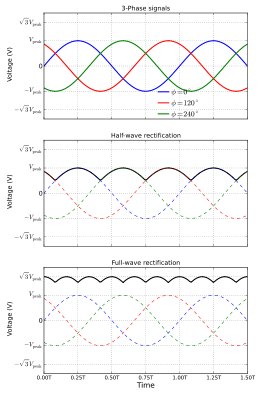