What is a Zener Diode? 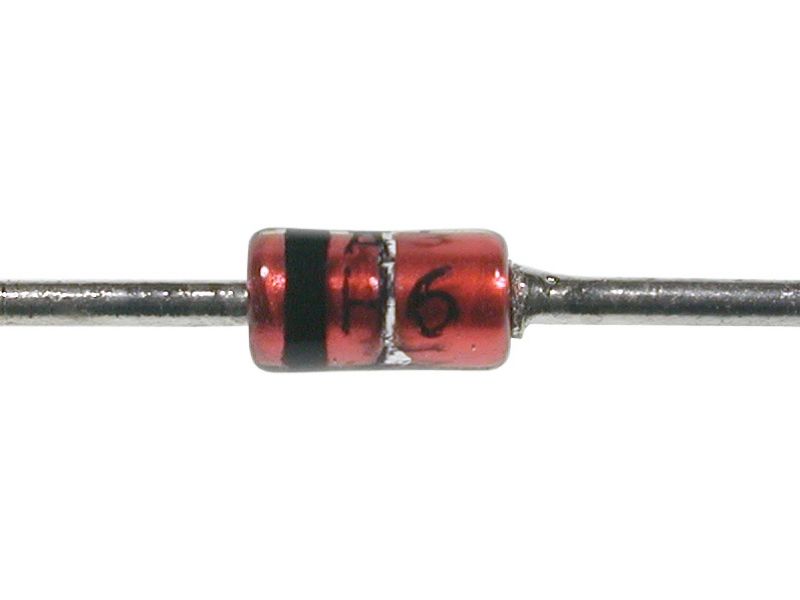 What is a Zener Diode? A Zener diode is a particular type of diode that, unlike a normal one, allows current to flow not only from its anode to its cathode, but also in the reverse direction, when the so-called “Zener voltage” is reached. Zener diodes have a highly doped p-n junction. Normal diodes will also break down with a reverse voltage but the voltage and sharpness of the knee are not as well defined as for a Zener diode. Also normal diodes are not designed to operate in the breakdown region, but Zener diodes can reliably operate in this region.
The device was named after Clarence Melvin Zener, who discovered the Zener effect. Zener reverse breakdown is due to electron quantum tunnelling caused by a high strength electric field. However, many diodes described as “Zener” diodes rely instead on avalanche breakdown. Both breakdown types are used in Zener diodes with the Zener effect predominating under 5.6 V and avalanche breakdown above.
Zener diodes are widely used in electronic equipment of all kinds and are one of the basic building blocks of electronic circuits. They are used to generate low power stabilized supply rails from a higher voltage and to provide reference voltages for circuits, especially stabilized power supplies. They are also used to protect circuits from over-voltage, especially electrostatic discharge (ESD).

Current-voltage characteristic of a Zener diode with a breakdown voltage of 17 volts. Notice the change of voltage scale between the forward biased (positive) direction and the reverse biased (negative) direction. 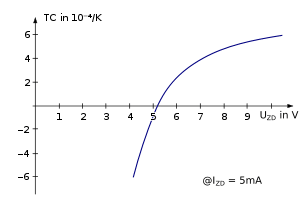 A conventional solid-state diode allows significant current if it is reverse-biased above its reverse breakdown voltage. When the reverse bias breakdown voltage is exceeded, a conventional diode is subject to high current due to avalanche breakdown. Unless this current is limited by circuitry, the diode may be permanently damaged due to overheating. A Zener diode exhibits almost the same properties, except the device is specially designed so as to have a reduced breakdown voltage, the so-called Zener voltage. By contrast with the conventional device, a reverse-biased Zener diode exhibits a controlled breakdown and allows the current to keep the voltage across the Zener diode close to the Zener breakdown voltage. For example, a diode with a Zener breakdown voltage of 3.2 V exhibits a voltage drop of very nearly 3.2 V across a wide range of reverse currents. The Zener diode is therefore ideal for applications such as the generation of a reference voltage (e.g. for an amplifier stage), or as a voltage stabilizer for low-current applications.
Another mechanism that produces a similar effect is the avalanche effect as in the avalanche diode. The two types of diode are in fact constructed the same way and both effects are present in diodes of this type. In silicon diodes up to about 5.6 volts, the Zener effect is the predominant effect and shows a marked negative temperature coefficient. Above 5.6 volts, the avalanche effect becomes predominant and exhibits a positive temperature coefficient.
In a 5.6 V diode, the two effects occur together, and their temperature coefficients nearly cancel each other out, thus the 5.6 V diode is useful in temperature-critical applications. An alternative, which is used for voltage references that need to be highly stable over long periods of time, is to use a Zener diode with a temperature coefficient (TC) of +2 mV/°C (breakdown voltage 6.2–6.3 V) connected in series with a forward-biased silicon diode (or a transistor B-E junction) manufactured on the same chip. The forward-biased diode has a temperature coefficient of −2 mV/°C, causing the TCs to cancel out.
Modern manufacturing techniques have produced devices with voltages lower than 5.6 V with negligible temperature coefficients, but as higher-voltage devices are encountered, the temperature coefficient rises dramatically. A 75 V diode has 10 times the coefficient of a 12 V diode.
Zener and avalanche diodes, regardless of breakdown voltage, are usually marketed under the umbrella term of “Zener diode”.
Under 5.6 V, where the Zener effect dominates, the IV curve near breakdown is much more rounded, which calls for more care in targeting its biasing conditions. The IV curve for Zeners above 5.6 V (being dominated by Avalanche), is much sharper at breakdown.

The Zener diode’s operation depends on the heavy doping of its p-n junction. The depletion region formed in the diode is very thin (<1 µm) and the electric field is consequently very high (about 500 kV/m) even for a small reverse bias voltage of about 5 V, allowing electrons to tunnel from the valence band of the p-type material to the conduction band of the n-type material.
At the atomic scale, this tunnelling corresponds to the transport of valence band electrons into the empty conduction band states; as a result of the reduced barrier between these bands and high electric fields that are induced due to the relatively high levels of doping on both sides. The breakdown voltage can be controlled quite accurately in the doping process. While tolerances within 0.07% are available, the most widely used tolerances are 5% and 10%. Breakdown voltage for commonly available Zener diodes can vary widely from 1.2 volts to 200 volts.
For diodes that are lightly doped the breakdown is dominated by the avalanche effect rather than the Zener effect. Consequently, the breakdown voltage is higher (over 5.6 V) for these devices.

The emitter-base junction of a bipolar NPN transistor behaves as a Zener diode, with breakdown voltage at about 6.8 V for common bipolar processes and about 10 V for lightly doped base regions in BiCMOS processes. Older processes with poor control of doping characteristics had the variation of Zener voltage up to ±1 V, newer processes using ion implantation can achieve no more than ±0.25 V. The NPN transistor structure can be employed as a surface Zener diode, with collector and emitter connected together as its cathode and base region as anode. In this approach the base doping profile usually narrows towards the surface, creating a region with intensified electric field where the avalanche breakdown occurs. The hot carriers produced by acceleration in the intense field sometime shoot into the oxide layer above the junction and become trapped there. The accumulation of trapped charges can then cause ‘Zener walkout’, a corresponding change of the Zener voltage of the junction. The same effect can be achieved by radiation damage.
The emitter-base Zener diodes can handle only smaller currents as the energy is dissipated in the base depletion region which is very small. Higher amount of dissipated energy (higher current for longer time, or a short very high current spike) causes thermal damage to the junction and/or its contacts. Partial damage of the junction can shift its Zener voltage. Total destruction of the Zener junction by overheating it and causing migration of metallization across the junction (“spiking”) can be used intentionally as a ‘Zener zap’ antifuse.

A subsurface Zener diode, also called ‘buried Zener’, is a device similar to the Surface Zener, but with the avalanche region located deeper in the structure, typically several micrometers below the oxide. The hot carriers then lose energy by collisions with the semiconductor lattice before reaching the oxide layer and cannot be trapped there. The Zener walkout phenomenon therefore does not occur here, and the buried Zeners have voltage constant over their entire lifetime. Most buried Zeners have breakdown voltage of 5–7 volts. Several different junction structures are used.

In this circuit, a typical voltage reference or regulator, an input voltage, UIN, is regulated down to a stable output voltage UOUT. The breakdown voltage of diode D is stable over a wide current range and holds UOUT relatively constant even though the input voltage may fluctuate over a fairly wide range. Because of the low impedance of the diode when operated like this, resistor R is used to limit current through the circuit.
In the case of this simple reference, the current flowing in the diode is determined using Ohm’s law and the known voltage drop across the resistor R;

The value of R must satisfy two conditions :

A load may be placed across the diode in this reference circuit, and as long as the Zener stays in reverse breakdown, the diode provides a stable voltage source to the load. Zener diodes in this configuration are often used as stable references for more advanced voltage regulator circuits.
Shunt regulators are simple, but the requirements that the ballast resistor be small enough to avoid excessive voltage drop during worst-case operation (low input voltage concurrent with high load current) tends to leave a lot of current flowing in the diode much of the time, making for a fairly wasteful regulator with high quiescent power dissipation, only suitable for smaller loads.
These devices are also encountered, typically in series with a base-emitter junction, in transistor stages where selective choice of a device centered around the avalanche or Zener point can be used to introduce compensating temperature co-efficient balancing of the transistor p–n junction. An example of this kind of use would be a DC error amplifier used in a regulated power supply circuit feedback loop system.
Zener diodes are also used in surge protectors to limit transient voltage spikes.
Another application of the Zener diode is the use of noise caused by its avalanche breakdown in a random number generator. 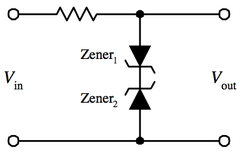 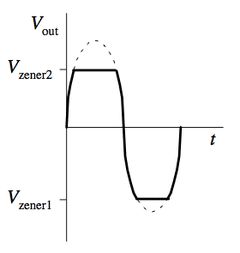 Examples of a Waveform Clipper

Two Zener diodes facing each other in series will act to clip both halves of an input signal. Waveform clippers can be used to not only reshape a signal, but also to prevent voltage spikes from affecting circuits that are connected to the power supply. 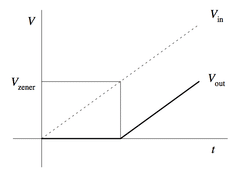 Examples of a Voltage Shifter

A Zener diode can be applied to a circuit with a resistor to act as a voltage shifter. This circuit lowers the output voltage by a quantity that is equal to the Zener diode’s breakdown voltage. 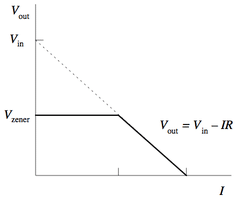 Examples of a Voltage Regulator

A Zener diode can be applied in a voltage regulator circuit to regulate the voltage applied to a load, such as in a linear regulator.

What is a Zener Diode?