What is Sziklai pair? 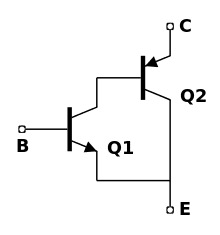 The gain of the Sziklai pair is slightly different as there is no individual contribution from Q2 as seen below.

In view of the fact that the terms βQi and βQ2 on their own can be neglected, we obtain the more familiar equation which can be used for both the Darlington and Sziklai pairs..

The Sziklai pair is named after the Hungarian, George Clifford Sziklai. He was born on 9th July 1909 in Budapest. He was educated at University of Budapest and then Technical University Munich.
In 1930 he emigrated to the USA where we worked for a number of companies including Radio Corporation of America and Westinghouse Electric Corporation and then in 1967 he settled at the Lockheed Palo Alto Research Laboratory.
Sziklai held around 160 patents including some for colour television and also credited with constructing the first Image Orthicon television camera. He also invented the transistor circuit configuration that bears his name: Sziklai pair. Sziklai died on 9th September 1998 in Palo Alto, California, USA.

In a typical application the Sziklai pair acts somewhat like a single transistor with the same type (e.g. NPN) as Q1 and with a very high current gain (β). The emitter of Q2 acts the role of a collector. Hence the emitter of Q2 is labeled “C” in the figure to the right. Likewise, in a typical application the collector of Q2 (also connected to the emitter of Q1) plays the role of an emitter and is thus labeled “E.” As with a Darlington pair, a resistor (e.g., 100Ω–1kΩ) is usually connected between Q2’s emitter and base to improve its turn-off time (i.e., its performance for high frequency signals).[1]

It offers a number of advantages including:

As many PNP transistors with almost equivalent performance to their NPN counterparts are now available, the advantages of using the Sziklai / compound pair are less than they used to be.

In view of its characteristics the Sziklai pair or compound pair finds uses in circuits in a number of areas including audio amplifier outputs, general audio amplifiers and also for digital switching.

Sziklai pairs are often used in the output stages of power amplifiers due to their advantages both in linearity and bandwidth when compared with more common Darlington emitter follower output stages. They are especially advantageous in amplifiers where the intended load does not require the use of parallel devices.[2]
Sziklai pairs can also have the benefit of superior thermal stability under the right conditions. In contrast to the traditional Darlington configuration, quiescent current is much more stable with respect to changes in the temperature of the higher power output transistors vs the lower power drivers.[3] This means that a Sziklai output stage in a class AB amplifier requires only that the bias servo transistor or diodes be thermally matched to the lower power driver transistors; they need not (and should not) be placed on the main heatsink. This potentially simplifies the design and implementation of a stable class AB amplifier, reducing the need for emitter resistors,[4] significantly reducing the number of components which must be in thermal contact with the heatsink and reducing the likelihood of thermal runaway.
Optimal quiescent current in an amplifier using Sziklai pairs also tends to be much lower than in Darlington-based output stages, on the order of 10mA vs. 100mA or more for some emitter follower output stages. This means that idle power consumption is on the order of a few watts versus tens of watts for the same performance in many cases.[2] This is a very compelling reason to use the Sziklai pair in cases where output power is moderate (25-100W), fidelity is critical and relatively low idle power consumption is desired.

Historically, designers frequently used the “quasi-complementary” configuration, which uses a Darlington push pair (i.e., two NPN transistors) and a Sziklai pull pair (i.e., one PNP and one NPN transistor). This configuration, which uses three NPN transistors and one PNP transistor, is advantageous because while the first transistors and the most common small signal transistors for decades were PNP Germanium devices, silicon PNP power transistors were slower to develop than and have historically been more expensive than their NPN counterparts. Alternately, if a germanium PNP device were used, it would have significantly different characteristics. In the Quasi-complementary topology, the performance of the lower pull pair, which used a single NPN transistor, more closely matched the performance of the upper push pair, which consists of two NPN transistors and an identical power device.[3]
While for decades the Quasi-complimentary output stage made sense, recently PNP and NPN power transistors have become roughly equally available and have more closely matched performance characteristics, and so modern audio power amplifiers often use equivalent topologies for both pairs, either both Darlington emitter follower or both Sziklai pair.[3][4]